The store will not work correctly in the case when cookies are disabled.

SKIWAX starts a fluoride-free comparison test program. As many already know, from the 2021/2022 season, the use of fluoride in official competitions will be prohibited. Many manufacturers have added fluoride-free lubricants to their product range to replace racing products. An important aspect of comparison in tests is comparable product characteristics: we will compare powders with powders, and paraffins with paraffins. We are also planning to test racing fluids / emulsions.

For the first stage of tests, 2 powders of the racing series were selected without fluorine content: 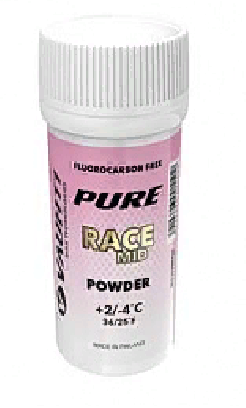 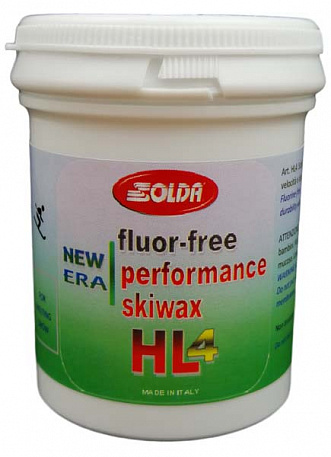 We decided to compare these products in two directions: with fluorine analogues in the line of the same manufacturer and with fluorine products from other manufacturers. This will allow avoiding the possible situation that on that very day some of the products simply "did not go" or fell into the error of the test.

During application, the following feature of both fluorine-free powders appeared: the grains have a significantly larger granule size than that of conventional fluorine powders, as well as increased rigidity, which makes it difficult to work with the powder when applied “under the cork”.

Solda HL4 powder has a fusing temperature of 120 degrees - this is really so, the iron was set at 125 degrees and the powder melted normally and did not smoke. Such a melting temperature will help protect the sliding surface of the skis from thermal damage during preparation and allow you to use any irons, including economical options.

Vauhti Pure Race mid powder has a melting point of 130 degrees, which is also confirmed by our experience. So the factor of the low temperature of the iron when applying powders of the SOLDA and VAUHTI brands is an undoubted advantage of the new products.

Testing was carried out on SkiTRAB Race Aero Skate WARM 193 skis with T4F6 structure. The skis are pre-cleaned with MAPLUS fluoride remover and brushed.

Before applying the powders, a null test was carried out.

As can be seen from the results of the initial test, there are slip losses, but they are not catastrophic: the difference between the best fluorine powder and the worst without fluorine is 4%. Is it a lot or a little? Of course, from the point of view of competition with fluorine products, the difference is significant, because 4% at 15 km gives a terrible 600 meters lag. But at the same time, 4% is not 10-15% that has been rumored for a long time.

In addition to sliding, a very important parameter is the wear resistance of the lubricant. After all, probably every skier knows the situation when the lubrication at the beginning of the race works perfectly, but after some time (sometimes extremely fast) the skis start to go worse. This may be due to two factors: the wax has come off and stopped working (poor wear resistance) or the wax / structure has picked up dirt from the track (poor dirt repellency). It is possible to increase the wear resistance by applying methods (using base paraffins / hardeners), but it will not work to avoid the accumulation of dirt by adjusting the wax (the effectiveness depends on the composition of the lubricant, not the method of application), only the correct selection of the structure can help here.

We applied both fluorine-free powders to 2 pairs of the same characteristics. The application was carried out on bare skis after MAPLUS fluoride wash. Iron temperature 135 degrees. After cooling for 30 minutes, the powders were brushed with a nylon brush, a horsehair brush, and finally with fine steel.

Overall, both powders performed consistently throughout the course. After the tests, both skis were treated with a wash, and no significant contamination was found. Perhaps this is due to the very clean snow. We will track this parameter in further tests.

As the first tests showed, fluorine-free powders are a fairly stable product, but still losing to 100% fluorine powders. Of course, if all athletes use only fluoride-free products, then the sports principle will remain, and the total time spent on the distance will not change significantly.

In the case of starts at which there will be no control of the use of fluorine, athletes using this type of wax will have an advantage over the rest of the start.

In the future, we plan to conduct comparative tests between liquid and solid paraffins, as well as compare racing emulsions.